The preview for this issue can be found online here ... HERE

Since these pages are shown in the preview (coloured and lettered), I thought I'd post the pages in B/W. This issue was a blast to draw. There's some cool scenery changes and some tense moments.

Pick it up at your local comic shop or online... While you're at the shop, think about adding Roche Limit, my new Image book that debut's in September, to your pull list. Me and the rest of the Roche Limit team sure would appreciate it! 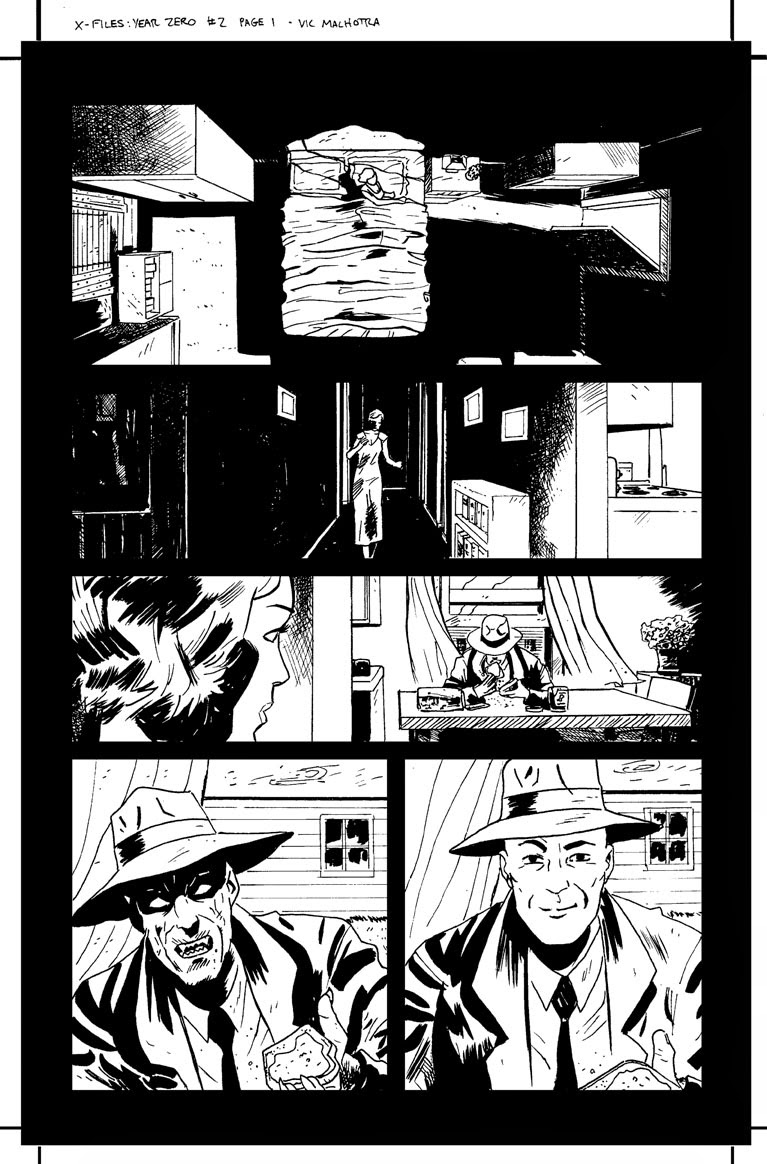 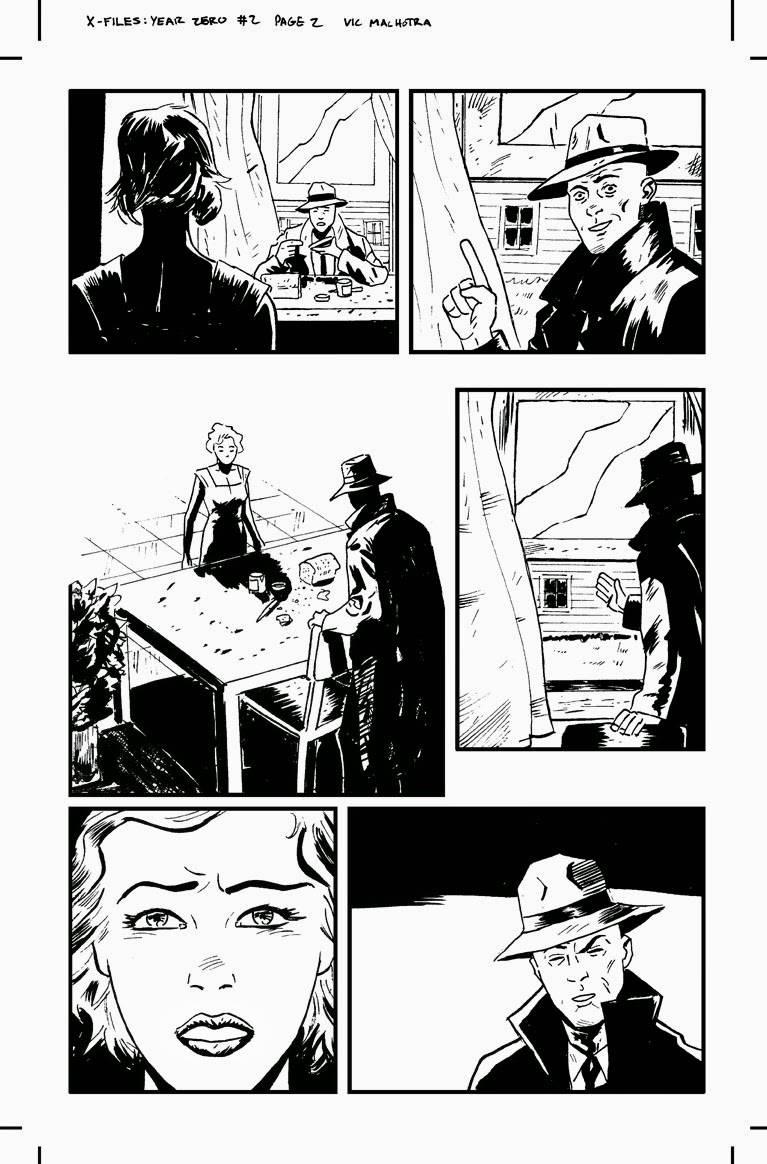 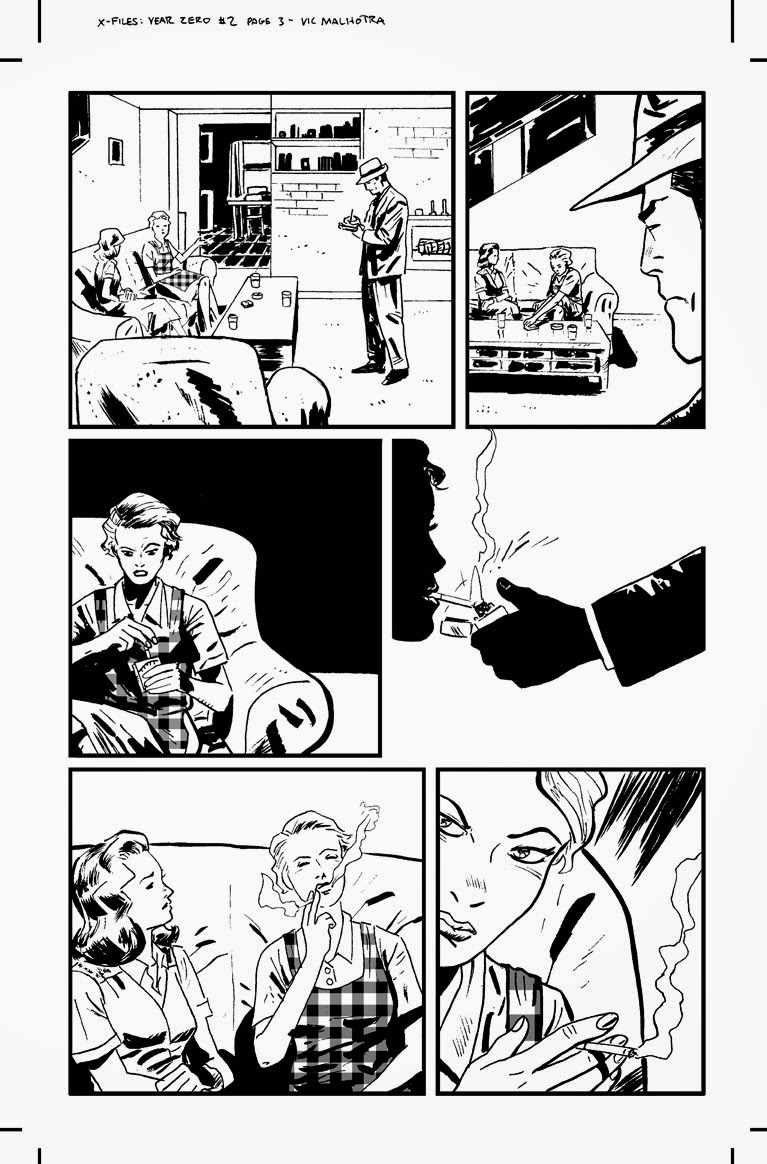 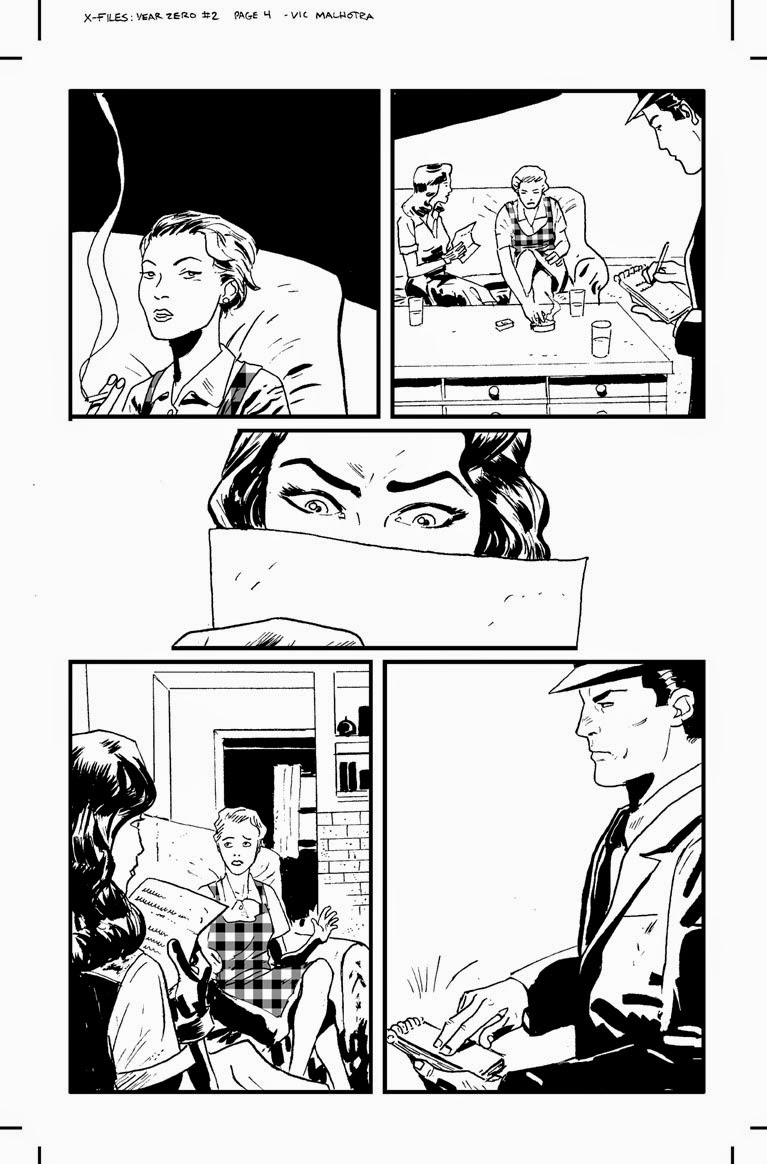 Posted by Vic Malhotra at 11:46 PM No comments: 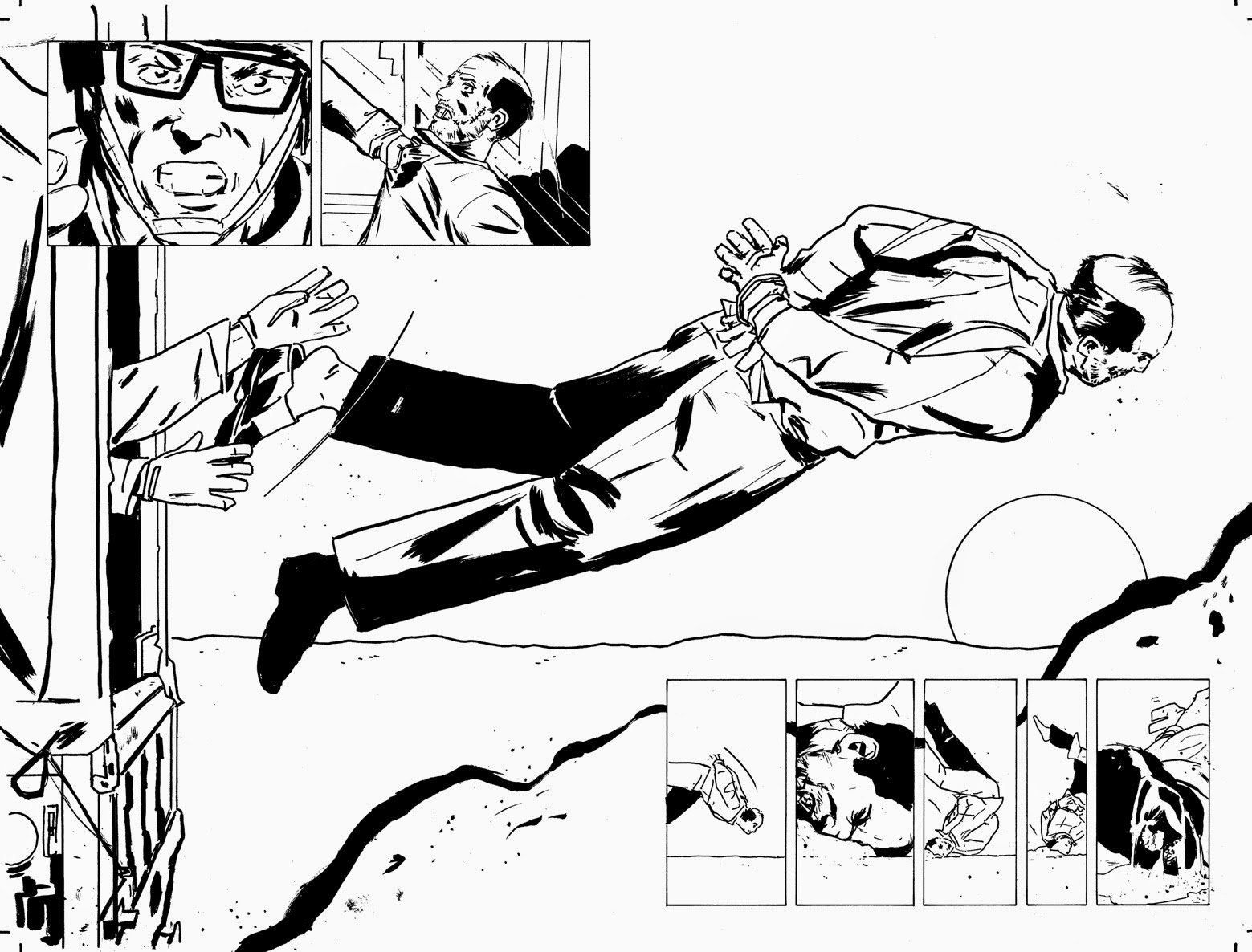 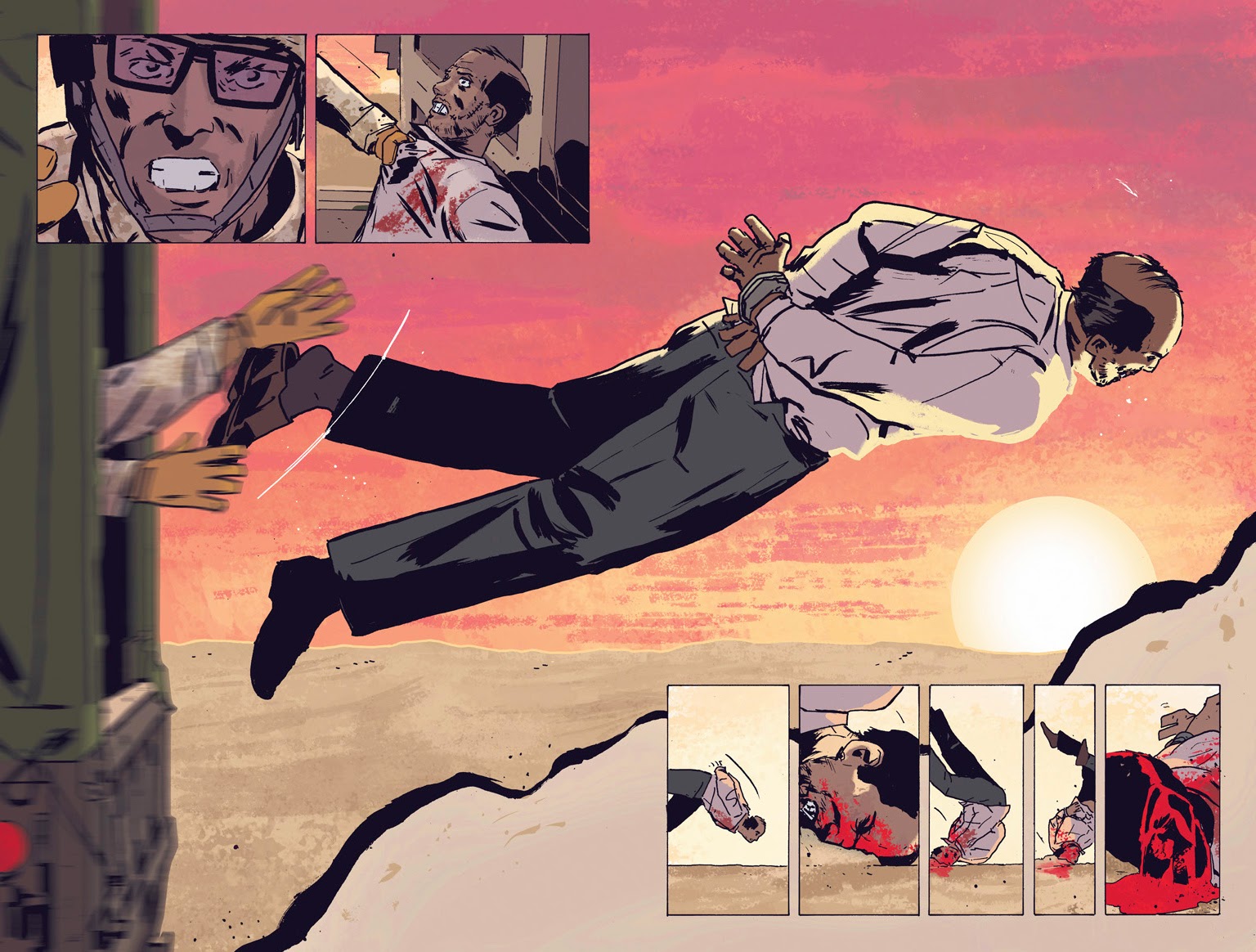 Here’s the black and white art and the colour art for a double page spread from Thumbprint which is a book I did last year.

My editor insisted I colour the book as well as draw it and it was a daunting task, but I learned a hell of a lot doing it. I’ll probably colour my own work again someday (I still colour some of the covers I do), but it’s nice to see what a great colourist can add to your work. it’s one of the best things about collaborating.

As far as the linework for this book and even for most of my stuff now, I always strive to capture some sort of urgency to the line and to the brush strokes. It’s very specific and I rarely hit the mark, but I think I’m getting better at it. I don’t think this example really worked as well as I’d wanted, but it’s still looks pretty good to me and was as good as I could do at the time.

For the colours, I planned from the layout stage to tackle the sky and the desert with colour and spent a good deal of time working on a digital painting that complimented the rough art. I spent a lot of time making a few custom brushes that gave me a good dry brush effect and used those brushes a ton for this book.

I’m not a big fan of using blur effects and that sort of thing on comic art, but I thought it added something here and the rest of the Thumbprint team liked it as well.

As for those small impact panels. I don’t think it was scripted that way, but I wanted to slow down and focus on how much of a rag doll the guy looked like as his body made contact with the ground.